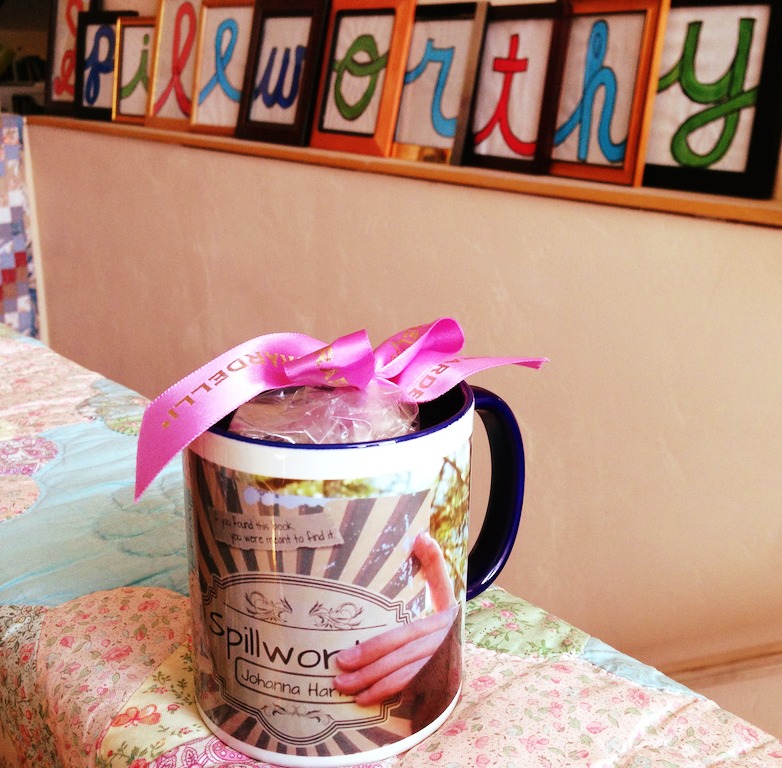 This mug filled with chocolates arrived for me yesterday--such a nice gift from an awesome friend. But really, I put it here to show you the frames in the background.

The kids and I put together the frames last fall. I had this great idea for a YouTube video where the frames went up on the side of our barn, one by one, and spelled out the name of the book.  It all sounded good in my head.

After a huge amount of effort, I discovered that I should have taken the glass out of the frames because the glare on the glass made it impossible to see all the letters at the same time. I could change the angle to remove the glare from one, but it would just pop up on another.

I thought I'd take the glass out and try again but, in the process of doing this, one of the frames broke. I'd have to get a new one.

Along the way, I lost my enthusiasm for the video and never attempted it again. The broken frame stays together if it's leaning, so all the letters became decoration for my office space instead.  I pretend that's what I always intended they would be.

Still, it was bugging me that I hadn't put anything up on YouTube. I have a few followers there, mostly because of a video J. C. Rosen﻿ convinced me to do on cluster plotting.

I suspect there's not a big crossover between YouTubers and the rest of my social media family because hardly anyone in my regular circles comments or clicks a thumbs up (or even a thumbs down) button. That's changed a bit since Google started posting G+ comments on YouTube videos, but I still see it. So most of the YouTubers represent people who don't travel in my regular circles and would likely never hear about my book unless I posted something.

You know what the second biggest search engine is after Google?  Right. It's YouTube. Clearly there's not room here for video phobia.

Still, I had that one idea that was supposed to all come together and it was now adorning the wall as decoration.  How much did I really want to invest myself in a new attempt?

That's when I turned it over to the kids. They make everything fun.  After our last book club, they jumped at the chance to be in a book trailer.  Even the librarian got involved.  Back home, the kids picked their favorite trailer template from iMovie and started dropping in pictures.

They had as much fun with the credits as anything else.  Did anyone notice that Baxter The House Lamb is our executive producer?  Jabberwocky (our sweet black & white cat with the unfortunate Hitler mustache) is the costume designer. Ruby Eccleston is my daughter's guinea pig and also director of photography.  If it made them laugh, we put it in.

This is the result:

Will this help sell the book?  I don't know. My first objective is name recognition, either for my name or the book's name. The more times people see the name (in a pleasing context), the better.

I want people to know this book is out there, but it's even more important to tell people that I care about kids and the voices of kids. Presenting a video made by kids feels like the right way to go.