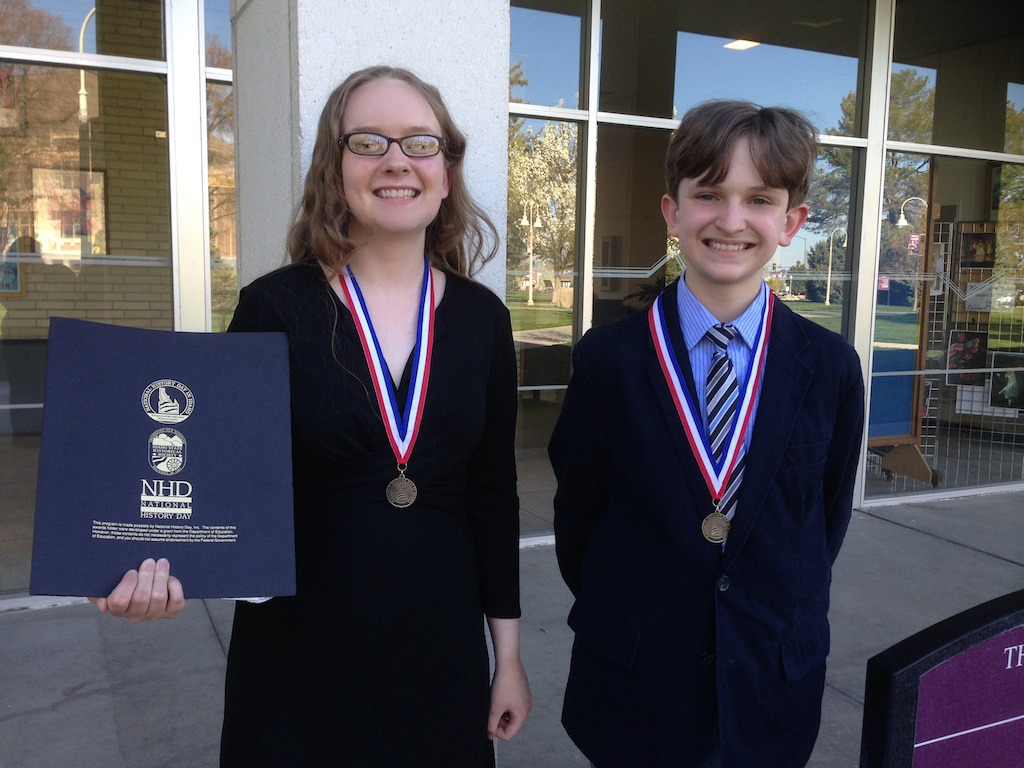 My kids started working on National History Day projects last October.  History is a major part of their homeschool curriculum.

Many say (and rightly so) that writing is best taught as an integrated part of other classes.  When you separate writing from content, you get busy work.  That's not a very good way to teach English. Words contain power.  The better we write, the more power our words contain. Purpose and passion come first. Writing comes second.

I also hear the argument that math should be taught as part of other courses. Show kids why they need math and they'll want to practice.  The same can be said for science.  Show me any meaningful activity in the world and we can probably talk about the science and math making it work.  And hey! Then we can write about it.

So where does history come into this?

History is the glue.  History informs us that nothing happens in a vacuum. All those scientific discoveries? They happened in time and space. They were influenced by all that came before and adherence to those ideas influenced what came after (for good or bad, for intended and unintended consequences).

Studying history helps us understand limitations of perception, and through that study, we begin to see the things that hold us back as well.

Growing up in the rural west, I remember hearing how I would have to move away to make anything of myself.  Living here apparently trapped me at a level of dire mediocrity.  I didn't question that assumption for years. When I chose to live in the place I love, I accepted being cut off from the rest of the world.

Granted, this was in the days before internet, so there we are again with context. Add to this a family history which includes members coming west, knowing they would never see parents and siblings again.  Moving west historically has come with trade-offs and those lessons, passed from one generation to the next, still ring of truth--even when they are no longer relevant.

A friend of mine described her attendance at a reception for elite artists in New York. She identified herself as being from Idaho, and her answer was actually waved away, as if untrue. "Forget that," she was told. "You don't need to live in Idaho anymore.  Move here and put that behind you."

I hear it from members of my local writing group. "No one wants to hear from an Idaho writer. Agents can't even find Idaho on a map."

That may be true for some. Certainly there are a great number who can't imagine people living west of Colorado without living on the coast.  I sent a post-apocalyptic story to one agent who sent back a note telling me I'd sent the wrong story, as this one appeared to be set in modern-day Idaho. I laughed, feeling bad for her even as I realized how bad she must feel for me.

Of course this is one aspect of living with privilege. People live in a context that informs them their context is the only one that matters.  We certainly have that in the west too--writing history that includes the valor of western settlement by European Americans--continuing to write as though the descendants of European Americans were never immigrants themselves.

"How can we hate recent immigrants without hating ourselves?"  The question came up around our kitchen table.

"Maybe we can't," my son answered. "Maybe all hatred starts with hating yourself first."

I was blinking, kind of blown away, a little close to tears. "You think there's anything we can do about that?"

My little girl stood behind me. I didn't realize she was there. "Just love people," she said.

"But you have to love yourself first," said my son. "Don't keep trying to be somebody else just because everyone says it's better."

My older daughter smiled from across the room.  She was taking notes for her National History Day paper.  She started participating in National History Day six years earlier, always choosing a topic central to the American West.  This year she was writing about Amy Trice and the Kootenai War of 1974. She was not blown away by the brilliance of her siblings. She knew they'd come to it, just as she had many years earlier.  If you study history long enough, you start seeing patterns.

My son turned back to his history project.  He started with fossils and math and a love of science.  Then he started looking at context.  Central to the story of Hagerman Fossil Beds was a rancher named Elmer Cook--a man who used grazing rights to protect fossils.  We heard from one longtime resident that she grew up hearing jokes about Elmer and the horse bones he found out in the desert.  Ah--context.

"What does that tell you?" I asked my son.

"He's kind of a hero. He spent his whole life like that--protecting fossils while people made fun of him. It's the best remaining late-pliocene fossil bed in the world. He saved our best clues to life in a time that spans three and a half million years, but nobody knows who he is."