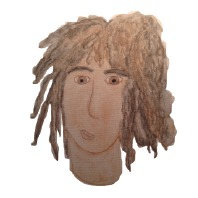 In Portland I could abandon Mom with her boyfriend-of-the-moment and go ask for food outside this pizza place. People don’t mind giving a kid their leftover pizza, and I don’t see how that’s any different than someone inviting me to dinner—except, of course, that we don’t actually have to talk to one another—and that can be a bonus.

Plus, the carryout box makes a perfect display for a spillworthy. The lid of a medium carryout holds about 500 words. With a small box, poetry works better, but a medium is perfect.

After my belly’s full, I’m like a ship with sails billowing with wind. I write my heart out, transfer those words to a box, and set them free.

My last medium spillworthy was about Keats. I propped it up on a garbage can outside our neighborhood music store. The next day I saw someone had cut it out and put it on display in the window alongside album posters. That was so cool.

Once, Old Doogy asked me, “What’s your deal?” So I told him, “I’m homeless.” And he nodded because it was like saying, “the sky is blue” or “your dog is ugly.” Self-evident.

But Old Doogy, being drunk, he thought about it for a long time before waving the bottle at me.

And so I told him, “I can’t take my writing with me. Where would I put it? So, you know, I fill notebooks and then I throw them in dumpsters and then I go beg for a new one. But sometimes I actually write something that shouldn’t be thrown away—something good, something worthy of spilling my heart out to the world.”

“Yes! And I rewrite those thoughts on pizza boxes or the backs of old posters—something big, but not too big—and I release that part of me into the world.”

And Old Doogy, he said, “don’t they still get thrown away?”

And I told him he must have missed the spillworthy I posted on the nature of art.

He took a deep draw from the bottle and squinted at me. Then, like a broken radio—once all static and then clear and booming—he said, “So tell me about the nature of art, young Spillworthy.”

And there were these well-dressed people walking by and they were looking at us funny, and the woman whispered, “Does it seem like the homeless people are smarter than our friends these days?”
And so I took that as encouragement, and I told Old Doogy that art requires only two people, although there is no upper limit for participation. First there’s the artist—the writer, musician, painter, mime, whatever. If the creation is really art, it changes the creator in some way. That’s the first requirement.

The second requirement is about the other person—the one who experiences the creation. If it’s really art, it changes something in the person who experiences it. There can be more than one creator and more than one person experiencing the art, but the circuit completes with a minimum of two people. That’s art. As long as my words reach one person first, it doesn’t matter if the pizza boxes get thrown away.

Old Doogy nodded and scratched his scruffy chin. When he opened his mouth, I expected him to belch but instead he asked, “What big name philosopher came up with that?”

“Never heard of him.”

His answer was quick and I realized he didn’t get my meaning, so I explained that I am Ulysses. I’m Ulysses S. Finch. And he laughed. And he kept on laughing and I started to turn red.