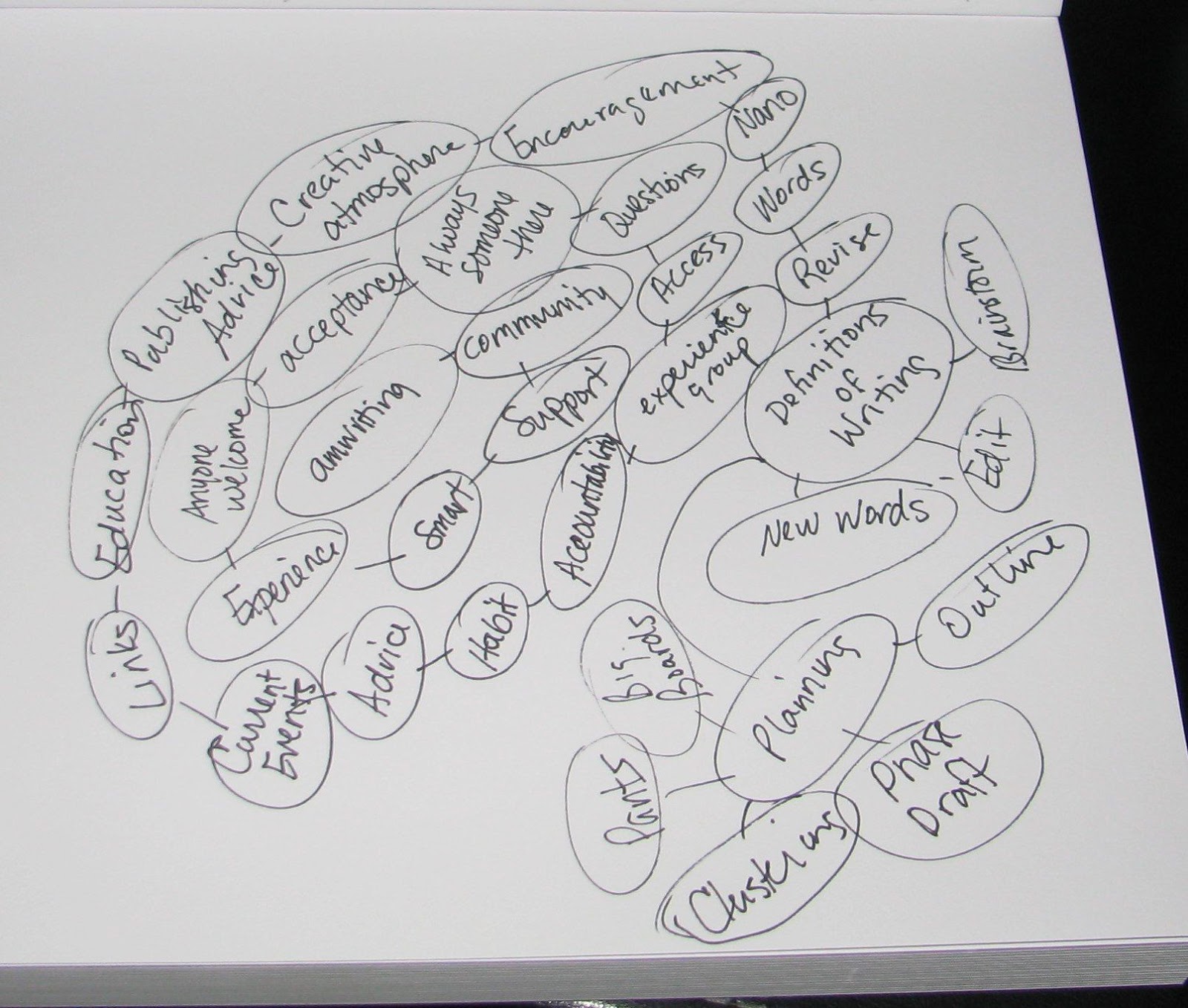 (Note: This post originally appeared in my old blog on December 2, 2009.  As topics reappear in discussion, I'm transferring the content here.)

The cluster pictured here is one I did for this blog entry, based on #amwriting.  I ended up considering something that happens repeatedly in the chat: someone says they are not really writing because they’re editing or planning or doing research or some other writing-related activity.  My direction at the end of the cluster is leading me toward a discussion of all the things that really should be included in a definition of writing.

Clustering is one of those things I thought I understood until I really experienced it.

I’m 42 years old.  I was introduced to clustering and mind mapping in high school.  The basic idea taught to me was that you put an idea in the center of the page, circle it, and then brainstorm ideas out from there.  For me, mind mapping was a messy, graphic way of outlining.  They were interchangeable for me and linear outlining was much easier to understand later.  So for years, I was under the impression that I knew all about this method and it just didn’t work for me.

I went to the SCBWI Conference in Utah last month and took a workshop presented by Terri Farley, author of the middle grade Phantom Stallion series.  When she started talking about clustering, I admit there was an inner-me that yawned and said, “not this again.”  Being a polite conference attendee, I listened.  Politely.  Then I listened attentively.  And finally, I realized she was talking about clustering in a way I had never considered.

I also should admit Terri really spoke to me because so many of her creative thoughts resonated with my own creative process.  She talked about sitting on the floor during her planning.  She uses notecards and she does a lot of her pre-planning work by hand.  So when she told us that clustering works for her, every time, that it’s a go-to method she relies upon, I was more open to hearing what she had to say.

These are the points that changed my experience of clustering:


Terri told a story about a heart-wrenching experience she had observing wild horses.  When she returned to her car, she couldn’t begin to put words to what she had witnessed, so she clustered her thoughts.  Within a few minutes, even with tears streaming down her cheeks and emotions everywhere, she had captured everything she needed to write about the experience, including the angle from which she would tell the story.

This spoke to me.

There are many times when I feel overwhelmed by my emotional response to my characters and their story--usually because I’m writing about something reflected in my own life in some way.  My standard response has been to wait for the strong emotion to pass and then find a logical approach to the topic at a later time.

Clustering allows me to get my thoughts on paper and find direction using my emotions (and not in spite of them).  This is a Big Deal.

Terri credits Gabriele Rico with opening up clustering for her.  The amazing thing to me is that I have Rico’s book, Writing The Natural Way, on my bookshelf.  I was already familiar with her ideas before I attended Terri’s workshop.  I can go to Rico’s website and read and I still see the words through old eyes.

Sometimes we need to hear the translation of an idea through another writer’s experience.  If I can do that for anyone with this blog entry, that’s a very good thing.

Remember:  cluster by hand, use circles and lines, don’t censor the connections between words.

And about the messiness of it?  Once you have the idea, it’s in your head.  You don’t ever have to look at the cluster again.  The value is in the process not the product.  How cool is that?
Labels: amwriting clustering Gabriele Rico hashtag Phantom Stallion planning revision Terry Farley Writing Writing The Natural Way