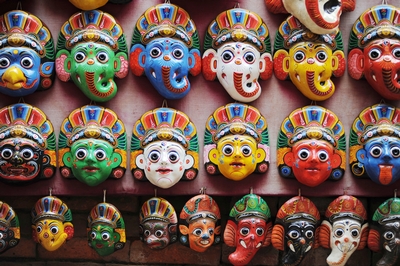 When I started writing my very first novel, the novel which shall never-ever-not-ever see the light of day, I head-hopped between characters all the time, shifting point of view whenever and wherever I felt like it.

I know why I did it and there's no writing theory behind it.  I head-hopped because I enjoyed the experience. Part of the thrill of being a new writer was knowing what all the characters were thinking and doing and feeling. Writing multiple POV was such a rush.

Some very nice writing friends cleared their throats and looked concerned and said, "Well, you know, this isn't the way most books are written."  Others said, "Maybe you should learn to play by the rules before you break them."

I didn't listen.  Why?  Because head-hopping was a fun, wonderful experience. When I envisioned my novel, I saw everything!  I knew every character's backstory and POV. I knew what everyone did and thought at every point on the timeline. I fell in love with this big picture and wanted to share every bit of it with readers.  In this way, I became involved in transferring the idea of a world rather than telling a story.

The result was a novel that never ended, full of engaging scenes with no purpose.  Beautiful imagery and symbolism rolled through worlds where everything happened---for no discernible reasons.

I've since learned that many first novels turn out looking a lot like mine.  I don't even feel foolish about it.  Perhaps first novels should be a clearing of the pipes. Random analogies and purple prose burst forth alongside archetypes and dreamy visions and authorial baggage.

Too often new writers are given advice based on convention: "That's not how narratives are generally written."  Or sometimes: "A POV like yours isn't going to sell."

Artistic souls don't often respond well to admonitions based on conformity. Many are still working proudly on their Being-Different merit badges (often called "exploring voice"). Since I'm in favor of individual choices and I don't find conformity all that appealing myself, I give head-hoppers three reasons to consider limiting POV:

Providing a Place of Rest for Your Reader

When you choose POV, you're giving your reader a place to rest.  You're pulling up a chair, asking the reader to settle in and enjoy the delicious words you're serving.

If you tell the story from one character's POV, the reader stays at the same table throughout the entire literary meal.

If you tell the story from two characters' POVs, you're asking the reader to get up and change seating every so often, shifting between two tables, maybe every time you shift to a new chapter. This can be fun and enlightening and shake things up a bit.

If you tell the story from three characters' POVs, you're requiring more shifting around. Readers may start to feel burdened by switching to a new table between every course.

If you shift POV three or four times within a scene, the reader barely gets settled, lifts a bite of words to her brain, and it's time to move move move move move.  "But I didn't even get a taste of that last thought!" Too bad. Move.

So this is a first reason not to head-hop.  It can be rude. You set up your delicious feast, ask readers to listen, and then you keep moving them all over the place just when they get settled.

You do have another option, of course. You can keep all the POV shifts as long as you sit, godlike, over your story. Offer the reader a place at your fire. Together you stare into the flames and see the characters a long way off.  But, if you do this, it becomes reason number two not to head hop:

If readers are buckled up next to one protagonist for the entire story, they'll feel everything that character feels as if they are that person.

You're not required to tell your reader everything you know.  It's okay to flirt, to withhold information, to tempt your reader from one page to the next with promises of delights barely imagined.

Your characters are allowed to do the same thing.  In fact, sometimes the best thing you can do for a character is eliminate his point of view.  The cowboy with the jagged scar across his cheek may be more appealing if we're not inside his head dealing with post-traumatic stress.  The old woman who walks her dogs by the protagonist's house every day--the one who claims to be a spy?  She may be a better character if we think she's lying and then find out she's not. Go into her head and there's no mystery to uncover.

It's a matter of control.  I'm still not saying a writer should never head hop.  Eliminate all head hopping and I'd lose some of my favorite authors. I have found, however, that restricting POV often provides more freedom to tell my story rather than less.

It's much easier to get readers to suspend disbelief when they know their place in the narrative and identify closely with the protagonist. That means I can reach farther with my plot.

It's much easier to keep readers intrigued if I play on the mystery inherent in a single character's POV. That means some pacing issues evaporate.

Knowing all the details of our worlds isn't enough for novel creation. We have to tell the stories.  Limiting POV is one of the tools we can use to make our worlds come into focus in a way that leaves our readers wanting more.
Labels: fiction head-hopping Johanna Harness novels POV Writing