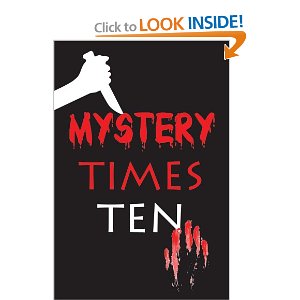 Last winter I entered a YA mystery contest with Buddhapuss Ink.  I was one of the ten winners and now my short story, "Cherry Bomb" is being published in the Mystery Times Ten Anthology!  I'm really excited to be here with some other great authors, many of whom I know on Twitter.  How cool is that?  The official release date is July 22nd, but you can pre-order on Amazon.  Yay!

Here's the official description.  (I've added Twitter names and blog links for some.)

Chosen from over 200 submissions, these ten mystery short stories come from new and established authors alike. Never before published, they are gathered together in our First Annual Mystery Times Ten YA collection.Each story was read and rated by three panels of judges, which included book bloggers, teen readers aged twelve to nineteen, and YA buyers and marketing mavens from the largest book wholesalers in the United States. Each judge was given the same set of parameters to use; each brought his or her own unique talents and tastes to the task at hand.There is something here for every YA mystery fan, from hardboiled to paranormal. Each story is a small bite of mystery that will satisfy and delight even the most discerning of readers. So sit down and dip in.

We guarantee you won't stop at just one!


Cecilia Dominic supports her writing habit through the practice of clinical health psychology and behavioral sleep medicine. She lives in Atlanta, Georgia with her husband and two cats. She is on the board of the Village Writers Group and is a member of the Romance Writers of America and Georgia Romance Writers. For fun, she blogs about wine, food, and life at random-oenophile.blogspot.com and about writing at ceciliadominic.blogspot.com. (Twitter: @RandomOenophile)

Wendy Sparrow spends most of her free time imagining how to get her characters out of the horrible situations she s dumped them in. When that gets dull, she parents two quirky kids with autism and glamorously washes laundry for her loving and supportive husband. She can often be found on Twitter spouting Mountain Dew fueled opinions or in her office the corner of the couch typing away on her next YA novel.  (Twitter: @WendySparrow)

Addie King has nine years experience as a prosecutor handling adult felonies, misdemeanors, juvenile delinquency cases, and appellate work. She holds a degree in criminal justice from Ohio Northern University and a law degree from the University of Dayton School of Law. She spends her spare time reading, writing fiction, and trying to wean herself from home improvement shows, cooking shows, and video games. During the day, she practices law in Urbana, Ohio.  (Twitter:  @addiejking + Blog: http://addiejking.wordpress.com.)

Johanna Harness taught college English for ten years before beginning the adventure of homeschooling her own children. She writes middle-grade and young adult novels in both northwest and fantastic settings (often forgetting which is which). She is the creator of the Twitter hashtag #amwriting and can be found posting there in her early morning hours.  (Twitter: @johannaharness + Blog:  http://www.johannaharness.com.)

J.A. Souders first began writing at the age of thirteen, when she moved to Florida and not only befriended the monsters under the bed, but created worlds for them to play in together. She is represented by the fabulous Natalie Fischer of the Sandra Dijkstra Agency, and blogs at Angels and Demons and Portals, Oh My! (jasouders.blogspot.com).  (Twitter: @jasouders.)

Kirsty Logan has visited many places and Tokyo is one of her favorites, though she has never been to Aokigahara. She currently lives in Scotland, where she writes fiction, edits magazine, reviews books, and works as an intern. She has a semicolon tattooed on her toe. Say hello at kirstylogan.com. (Twitter: @kirstylogan.)

Elyse Dinh-McCrillis is a former news reporter who currently works as an actress/writer/editor. She blogs about books, movies, and TV at Pop Culture Nerd (popculturenerd.com). She proudly admits to playing chess and knowing every line of dialogue from Star Wars. (Twitter: @popculturenerd.)

KC Sprayberry loves reading, but not as much as she loves writing stories for young adults and middle-graders. Her interest in telling her stories goes back to her high school years, where she excelled in any and all writing classes. After a move to the northwest area of Georgia, she dove into this pursuit full-time while raising her children. While she spends many days researching areas of interest, she also loves photography and often uses it as a way to integrate scenery into her work. (Twitter: @kcsowriter.)

Barb Goffman is a short-story mystery author whose work tends to focus on families. Twice nominated for the Agatha Award, she is a member of the national board of Sisters in Crime, a co-coordinating editor of Chesapeake Crimes: They Had It Comin and the forthcoming Chesapeake Crimes: This Job is Murder, and is program chair of the Malice Domestic mystery convention. She lives in Virginia with her miracle dog, Scout (a three-time cancer survivor!). You can learn more about her at barbgoffman.com.

Melanie Cummins is a busy college student and a full-time writer. When she s not typing away late at night, she studies criminal justice at the University of West Florida. While Melanie adores writing short stories, her true love lies in writing thrillers. (Twitter: @lea_mien.)