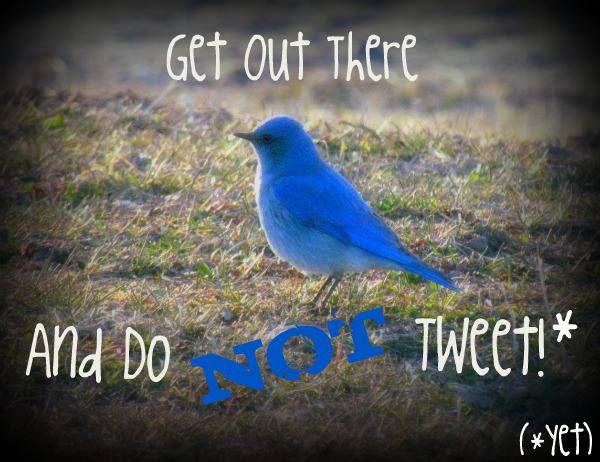 I want writers to refrain from tweeting until they can stand it no longer. The conversation becomes too engaging, the discussion too creative and delightful. There seems a very real possibility that remaining silent may cause an author's brain cells to implode. Repressed words bounce around so rapidly, the writer's hair may catch fire from the friction.  Hands begin to tremble. Knees shake. Then, only then: go ahead, writers.  Tweet.

When I started exploring Twitter, I did so anonymously. I had a protected account and I tweeted silly things, like messages to my husband sitting across the room. I took time to see how tweeting worked and what I could expect from it.

While I felt overwhelmed with learning the meanings of @ and # and #ff and the rest, I was not in the public view.

I’m not convinced telling writers to tweet is a good idea, especially while they’re new to the platform. I can’t imagine how anyone could understand Twitter by jumping in and tweeting right away.  It’s like telling someone to enter a conversation by barging into a group of strangers and talking loudly.

Much better?  I encourage everyone to join Twitter to listen.

I started out following reporters.  I’d see someone tweet about the cab ride to a press conference and then I’d turn on the television and catch sight of that person behind the reporter with the big hair—and yeah, big hair, just like she said—how could she even see?  I started seeing familiar bits of the world through other points of view.

And the writer in me danced.

You see what I’m seeing, right?  Access to the world from so many points of view?  It’s a candy store for writers.  I started following so many people, studying how they talked, what they found important, how they reasoned.

I followed reporters who were all at the same events together, comparing what each thought worth mentioning and how they interpreted the same things.

At some point it occurred to me that I’d spent a lot of time doing this weird little internship with reporters and suddenly the world of reporting felt a lot more accessible to me.  Not only could I write a fairly believable character based on these people, but I could actually see my own path more clearly if reporting were something I wanted to do.

Yes. That’s when the lightbulb quit flickering and started really burning a hole through my brain. The next day, I deleted my personal, anonymous account and started an account with my real name.   That day, I did not follow all the same reporters I’d been following for months.  That day I started following novelists.

I still did not tweet.  I followed.  I listened.

Thirsty to drink up the experiences of other writers, I followed a lot of people.  When they followed back, it surprised me. I couldn’t imagine why anyone would be interested in me. Still, I floated along, reading and absorbing, without tweeting much.

When I finally started tweeting, it was not because I needed an author platform.  It was not to “put myself out there.” It was not to publicize a blog post or a short story or a publication. I started tweeting because a conversation intrigued me and I had something I was dying to contribute. If I didn’t respond, I thought my overstimulated brain cells would self-combust.  That’s the moment everyone should start tweeting. As I started contributing, other writers welcomed me and I started making friends.

When it finally came time to send out queries for my novel, the process did not feel foreign. Writing mentors encouraged me and dared me to be brave.  I’d followed others’ progress through the same process and I knew what to expect.  When I had questions, friends provided answers.

I’d watched professional reporters supporting each other and becoming mentors for people they didn’t even know (people like me!) and they did this through sharing their work. This is important, so I’ll say it again. They shared the work of reporting. They weren’t all tweeting links to their most recent articles on whatever news sites.  They tweeted their experiences as they worked.

Most successful authors say there’s very little to describe about their writing days.  They sit and they write.  This is true, I’m sure, on the grand level of looking back, but the details of those days?  Magic.

On Twitter we see those details.  When writers discuss their works in progress, we see despair on the bad days, euphoria on the good days, and all things in between. We see the work of writing: the endless revisions, the courage to face rejections, the inspiration derived from interaction with an editor or a beta reader. We see words evolve to e-book or print or both. These are real writers, not the polished images of muses who dream an entire series and channel words through fingers the next morning.

These are working writers.  They’re tough. And smart. And witty.  And engaging. When I check into the #amwriting community every morning, I chat with colleagues until the caffeine finally pings a response from my brain. Then I turn to my own writing in a virtual office filled to the brim with this crazy, amazing, creative energy.

That’s why I tweet. That’s how a little hashtag grew into a community that includes more than 2000 writers tweeting each week--and many more who email to say they read without tweeting--just like I did with reporters! That’s how I ended up with more than 28,000 followers without trying to market myself to anyone.

So if you’re a writer, I don’t encourage you to tweet--not until you’re ready.  Get out there and listen. The tweeting will follow.
Labels: amwriting Johanna Harness twitter writers Writing