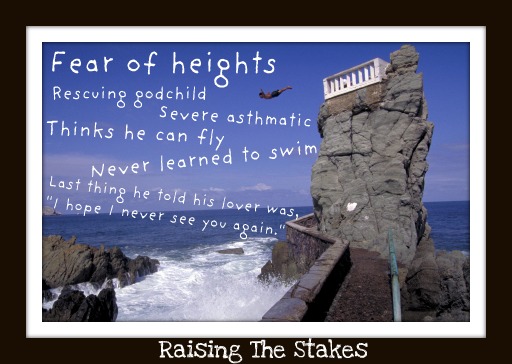 Like most writing advice, we can hear something so many times that it fails to have any meaning for us anymore.  Not everything can be a life or death situation, right?  And if it is, how do we top that when it's time to raise the stakes later in the book?  So now it's life or death for me and my best friend.  In the next scene it's me, my friend, and the dog.  In the next section, all those plus two more dogs.  Now it's the two of us, the three dogs, and the orphanage.  Right.  Plus their goldfish.  Fine.  Now are the stakes people happy?

And the great thing about this?  Our characters are complex and layered, so there are always ways to increase the stakes.

We should be asking, "What matters most to this character?"

What one thing could you threaten that would make your main character completely wig out?

How has your character structured her life to protect that one thing?  It might be a belief system or a moral code.  It might be a need to nurture those in need. It might be an unquenchable thirst for knowledge.

You know your characters better than anyone.  If you really wanted to make them hate you, what buttons would you push?  Could you make them so angry they'd never talk to you again?

Now you're getting somewhere.