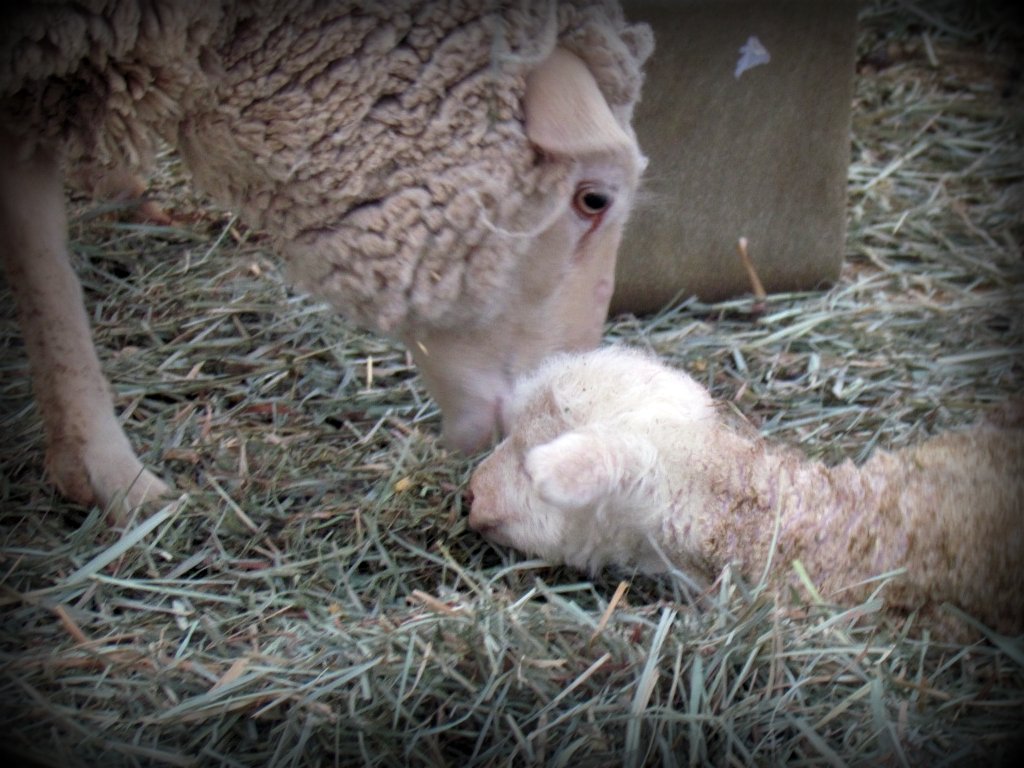 This is the time of year when my thoughts turn to the confluence of shepherding and writing.  It’s lambing season and I end up spending some of my prime writing time sitting with pregnant ewes or newborn lambs.  While I observe the sheep, my mind is on my characters.  I swear I have a whole book of essays on the things my flock teaches me about writing.

Last week I’d finished writing about two-thirds of my new young adult novel when my characters took a right turn when I expected them to take a left.  Even though I plan my novels well ahead of time, I usually accept that these turns happen organically.  My characters are complex and sometimes their actions surprise me.

My usual reaction to character independence is to go with the change.  My thought in doing so? For better or worse, this is my story. It wouldn’t be authentic for my characters to react any other way.  I’ve re-plotted entire endings after turns like these.

This time I worked the same way. At the heart of the matter:  I was infatuated with the decisions my characters made. They surprised me and impressed me.  They had courage and strength I never imagined.  Their actions brought out aspects of their personalities just below the surface. The outcome even changed the way I viewed the bad guys.  I was blown away.

Then my work came to a halt for lambing.  I sat outside with a ewe’s head in my hands, comforting her through a series of difficult contractions, and I realized something was wrong.  Her labor was moving forward, but it wasn’t going as planned.  She hadn’t progressed far enough for me to determine the problem, but I knew. Normally so much pressure would be opening things up.  Instead her possibilities seemed to narrow the more she pushed.

Waiting with her, my mind raced ahead through the next scenes in my novel.  My lovely characters dashed into uncharted territory and I re-plotted the book in my mind.  It was all so good and fresh and wonderful.

Then I saw the scene I never expected:  the last scene.  It came up on the horizon about 20,000 words earlier than expected.  If I followed the natural trajectory of the new scenes, I would lose the opportunity to write a huge chunk of my novel.  As enthusiastic as I felt about the recent turn of events, about the exciting new character dimensions, I couldn’t abandon those 20,000 words. I knew without doubt that those words not yet written contained much better stuff than the last 5,000 that made my heart flutter.

As I sat there that day, considering turning my novel into a novella because I loved the new ending so much, my ewe finally progressed enough for something to appear.  It was the tail of her first lamb.  No legs to go with it. No nose. No hoofs. Just the tail.

Back in the house, I scrubbed up and changed clothes and found supplies. There was no way around what had to be done.  The lamb had to go back inside far enough for the hind legs to come forward, then it had to be pulled quickly, so it would survive the sudden break of the umbilical cord.  I don’t enjoy this part of shepherding, but without it, the lambs and the ewe die.

Pulling that first lamb, seeing her breathing, that’s when I realized: organic character development is not reason enough to accept a story’s unplanned demise. Sometimes the natural progression of a thing takes us to the wrong place.  Sometimes, no matter how painful, we have to back up and find the path that creates the ending we desire.

Three lambs were born that day. They survived the birth. The ewe survived their birth. About them, I have more stories to tell.

I cried a lot. I always do.

Then, once they’d settled in the barn, I went inside and pushed my story back 5000 words.
Labels: Johanna Harness lambing planning Writing