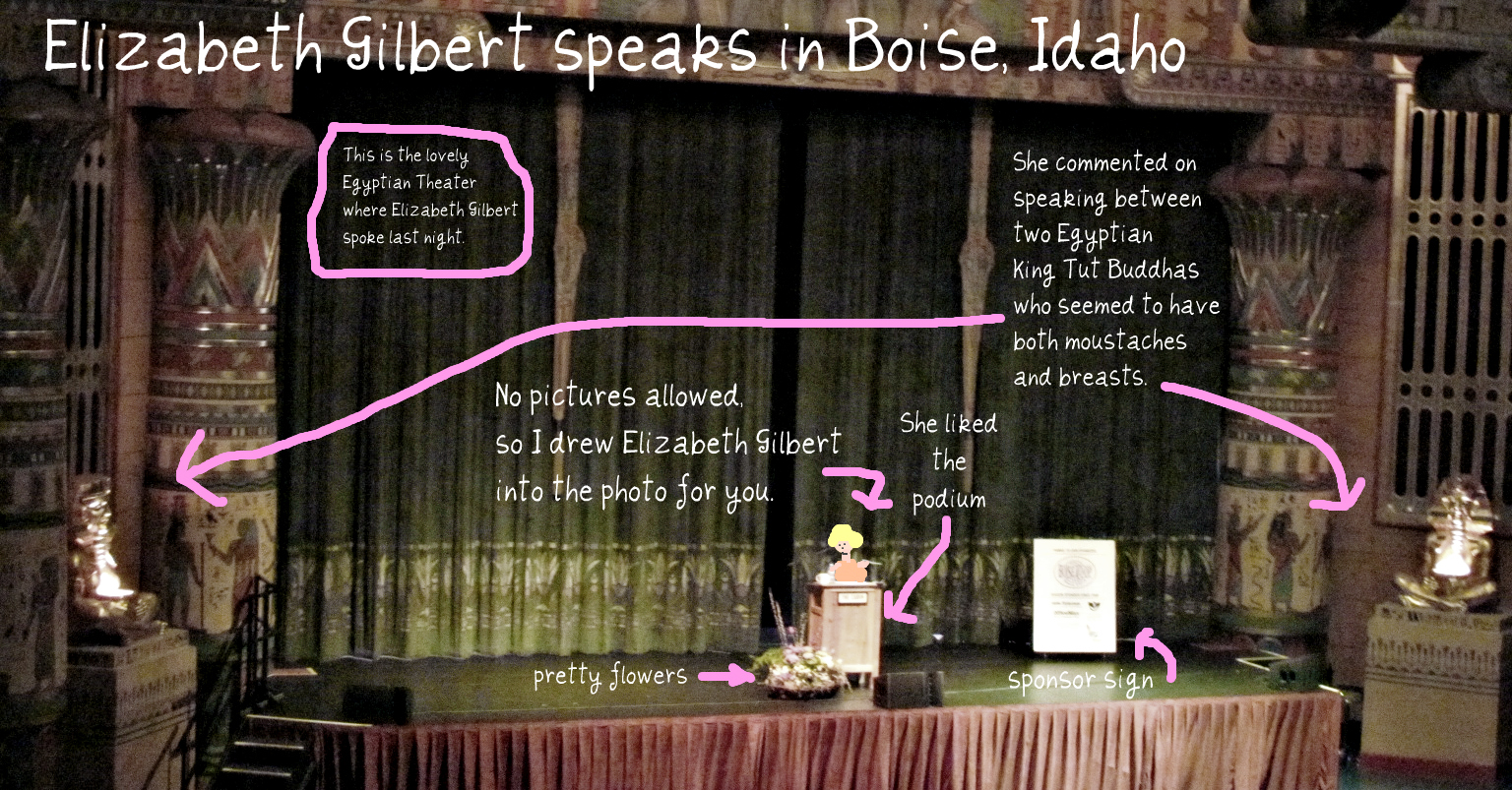 Last night I went to see the lovely Elizabeth Gilbert at The Egyptian Theater in Boise, Idaho.

The house was sold out - as well it should be.  Gilbert was a wonderful speaker.

Most of the prepared speech centered around Gilbert's marriage to writing, beginning with a vow she made to her craft at a young age.  She describes stages of her writing in terms of relationship.  As a young woman, she and writing lost themselves in passion.  She didn't need money for her craft, only to be with it, to commune with it, to get lost in it.  Then she sold her first article to Esquire and her relationship to writing changed and matured.  She started to have expectations of writing.  She says when Eat, Pray, Love made it big, it was like being married to an accountant for twenty years and waking up next to a rock star.

"I'm not sure this is good for our relationship," she quipped.

The next book brought the relationship to crisis.  Her best-selling memoir provided financial security and success.  She wrote that next book, looked through it, and realized it was not good.  She described how artists all know the feeling of the art not living up to the vision we have of the art---"like a non-identical twin"---and then she added: "This was not like that. This book really sucked."

For the first time in her life, she took time off from writing.  In relationship terms, she said this was the point when she looked across the table at writing, the kids grown, the successes lived, and she asked of writing, "Why are we still doing this?"

The talk culminated in her realization that she'd been trying to write to please all the readers of her very-successful memoir, something she'd never before tried to do.  Writing returned to her when she remembered she'd always just written from her heart.  If she remained loyal to the natural flow of words, she might never have another huge book, but that would be okay, because she'd still be in her relationship with writing.

Gilbert was delightful and warm.  She flattered Boise with her comments on the city, The Egyptian Theater, and The Cabin (sponsor of her appearance).  She took questions after her talk and, although she clearly answers many of the same questions at every appearance, she responded generously and thoughtfully.  One of my favorite replies was to a question about critics who say Eat, Pray, Love is too self-absorbed:  "It always amuses me when someone levels this criticism at a memoir.  It is a memoir."